Designs Act - Defendant can not deal in water purifier cabinets having similar logo and name as that of plaintiff: HC (See 'Legal Desk')

Trade Marks - Application for registration of mark can be allowed if identical marks with respect to similar services being provided in other States, stand registered by Registrar: HC (See 'Legal Desk')

Quantum Computing to be at core of growth: MoS (See 'Corp Brief')

CPC - Case can be remanded back as procedure as set out in Rule 4 of Order XIIIA of CPC is not followed while passing impugned order: HC (See 'Legal Desk')

SEBI Act - Since it is not established that summons are delivered to Noticees, question of non-compliance with summons can not be determined: SEBI (See 'Legal Desk') 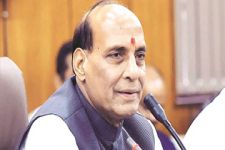 NEW DELHI, NOV 29, 2022: RAKSHA Mantri Rajnath Singh has appealed to the nation to contribute generously to the Armed Forces Flag Day Fund, terming it the moral responsibility of every citizen to ensure the welfare of the soldiers and their families. Addressing the Armed Forces Flag Day CSR Conclave, organised by Department of Ex-Servicemen Welfare, Ministry of Defence, in New Delhi today, he expressed gratitude to the retired as well as serving Armed Forces personnel, whose valour & sacrifice, has safeguarded the sovereignty and integrity of the country.

The Raksha Mantri made special mention of a soldier's message enned on the Kohima War Memorial in Nagaland, which read 'When you go home, tell them of us and say, for your tomorrow, we gave our today' . He said, it is a collective responsibility of the nation to help the soldiers and their families.

"Since independence, whether it was to win wars or counter terrorist activities from across the border, our soldiers have given a befitting reply to all challenges with courage and promptness. In the process, many of them made the supreme sacrifice and many became physically disabled. The entire responsibility of their family rests on them. It is, therefore, our ultimate responsibility to come forward and support our soldiers and their families in every way possible. It is because of our brave soldiers, who are always alert at the borders, we sleep peacefully and live our lives without fear," said Rajnath Singh.

The Raksha Mantri also threw light on the fact that a large number of military personnel retire at the age of 35 to 40 years so that the youthful profile of the Armed forces is maintained. He described this as another reason for the people to extend all possible help to the ex-servicemen and their dependents.

Reiterating the Government's commitment towards the welfare of the country's bravehearts, Rajnath Singh stated that a number of initiatives have been taken in this direction. The initiatives include 'Bharat Ke Veer' portal, which was launched when Rajnath Singh was the Home Minister, for the welfare of officers and jawans of Central Armed Police Forces. Recently, 'Maa Bharati Ke Sapoot' website (www.maabharatikesapoot.mod.gov.in) was launched by the Raksha Mantri for contribution to the Armed Forces Battle Casualties Welfare Fund.

The Raksha Mantri asserted that "the welfare of soldiers, who ensure our national security, should not be the responsibility of only the government, but it should be the duty of all". He emphasised that industries and businesses can never flourish in a country where national security is not strong. Appreciating the support of big corporate donors in the last few years, which has led to a substantial increase in the fund, he exhorted the fraternity to contribute even more for the well-being of the soldiers and the nation at large.

With top corporate heads in attendance at the event, Rajnath Singh stated that the government recognised the power of the private sector & its role in the progress of the country as soon as it came to power in 2014, adding that the defence sector, which was always considered untouched for the private companies, is now fully prepared to welcome them. He urged the private sector to provide employment opportunities to about 60,000 soldiers who retire at a very young age every year, saying that these disciplined ex-servicemen are capable of understanding the most complex technology and using it proficiently. He said, the Department of Ex-Servicemen Welfare carries out the task of ensuring employment for the veterans and the Industry can make a special contribution in this direction.

"The Government does not consider the ex-servicemen as a liability, but we see them as valuable assets, who are not only disciplined and an inspiration to society, but also equally effective as a workforce. By including them, the private companies can increase their productivity and help these ex-servicemen lead a dignified life," said Rajnath Singh.

On the occasion, the Raksha Mantri launched a new website for the Armed Forces Flag Day Fund (www.affdf.gov.in). The portal is an interactive and user-friendly portal developed to promote online contribution to the fund. He also released the anthem for this year's promotional campaign for the Armed Forces Flag Day. He also felicitated the prominent CSR contributors to the Fund including Indian Oil Company Limited, Mother Dairy, State Bank of India, ICICI Foundation, LIC Golden Jubilee Foundation and LIC Housing Finance Limited.

The Department of Ex-Servicemen Welfare has been working for the welfare and rehabilitation of war widows, wards of martyred soldiers and Ex-Servicemen, including disabled ones by providing financial assistance for their identified personal needs such as penury grant, children's education grant, funeral grant, medical grant and orphan/disabled children grant. This assistance is provided out of the Armed Forces Flag Day Fund for which contributions are received from the general public on AFFD which is celebrated on 7 th December every year. Contributions to the fund are exempt from Income Tax under Section 80G(5)(vi) of the Income Tax Act, 1961.

An amount of Rs 34 crore was received as a contribution to the fund in Financial Year 2021-22. Concerted efforts are needed to increase the contributions to the fund to meet the growing requirements of financial assistance. Contributions can be made to the Fund by cheque/DD/ NEFT/RTGS drawn in the following bank accounts: