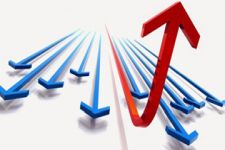 NEW DELHI, AUG 02, 2022: AS per provisional estimates released by National Statistical Office (NSO), Indian economy in 2021-22 has fully recovered the pre-pandemic real GDP level of 2019-20. This was stated by Union Minister of State for Finance Pankaj Chaudhary in a written reply to a question in Lok Sabha yesterday.

Giving more details, the Minister stated that as per provisional estimates released by National Statistical Office (NSO), Indian economy in 2021-22 has fully recovered the pre-pandemic real GDP level of 2019-20. The real GDP growth in 2021-22 stands at 8.7 per cent, 1.5 per cent higher than the real GDP of 2019-20. Owing to recent global crisis, various international agencies, for FY 2022-23 and FY 2023-24, have revised downward the growth projections of several countries including India but the revised growth for India is still higher than that of major advanced and emerging market economies, the Minister stated.

The Minister stated that the Central Government reduced the Central Excise duty on petrol and diesel by Rs. 8 and Rs. 6 per litre respectively effective from May, 2022 to give a further fillip to the economy and to boost consumption and keep inflation low, thus helping the poor and middle income classes.

At the same time, the Minister stated that the Government's recent initiatives such as an increase in customs duty on gold imports from 10.75 per cent to 15 per cent, imposition of cess of Rs. 17,000 per tonne (by way of special additional excise duty-SAED) on domestic crude and SAED / cess on exports of diesel and aviation turbine fuel shipments at the rate of Rs 11 per litre and Rs 4 per litre, are likely to have a positive impact on Government's tax collections.

The Minister further stated that GST collections in the first quarter of 2022-23 registered a growth of 36.4 per cent compared to the corresponding period of the previous year indicating a stronger revenue position of the Government. A recent revision in GST rates is expected to further boost Government's revenue collections.