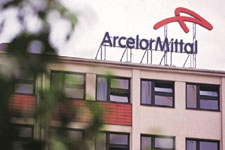 BHUBANESWAR, MAR 05, 2021: STEELMAKER ArcelorMittal Nippon Steel India (AM/NS India) on Thursday inked a deal with the Odisha government for setting up a 12 million tonne integrated steel plant in the Kendrapapda district of the State with an investment of Rs. 50,000 crore.

Chief Minister Mr Naveen Patnaik and steel tycoon Mr Lakshmi Niwas Mittal were present during the signing of the Memorandum of Understanding (MoU) for the mega investment project.

AM/NS India is one of the largest steel makers in the world, combining the financial might of the LN Mittal Group and the technological prowess of Japan's Nippon Steel.

Minister of Steel Mr Dharmendra Pradhan extended his congratulations to the signatories of the MoU.

"This mega steel plant in Kendrapada will bring a new wave of economic development and employment generation in Odisha and will give boost to Prime Minister Mr Narendra Modi's vision of Purvodaya and Aatmanirbhar Bharat [self-reliant India]," said the minister.

The development comes days after Mr Pradhan discussed several issues, including the developments in eastern India, with Mr Mittal and the group's CEO Mr Aditya Mittal.

The upcoming steel plant will benefit from massive infrastructure developments in the region over the past six years, such as the expansion of Paradip port and setting up of Mahanadi riverine port, key freight and passenger rail corridors such as the Paradip-Haridaspur new line, and fast-track construction of highways, said the Ministry of Steel.