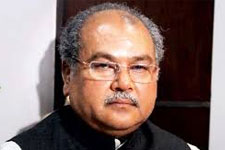 NEW DELHI, JUNE 26, 2020: For forming up its recommendations for the years 2020-21 to 2025-26, the Commission today held a detailed meeting with the Ministry of Panchayati Raj (MoPR) headed by Mr Narendra Singh Tomar, the Union Minister of Rural Development, Agriculture and Farmers Welfare & Panchayati Raj.  Discussions on behalf of the Commission was led by Chairman, Mr N. K. Singh.

The Terms of Reference of the 15 th Finance Commission mandates it to recommend “the measures needed to augment the Consolidated Fund of a State to supplement the resources of the Panchayats and Municipalities in the State on the basis of recommendations made by the Finance Commission of the State.”  The Commission had considered this matter and submitted its recommendation for the local bodies in its report for the year 2020-21 and also indicated a broad roadmap for the rest of its award period.  It will be recalled that Rs. 60,750 crores were allocated to RLBs for this period in two instalments : 50% as Basic Grants, and 50% as Final Grants.

The MoPR has now submitted that XV FC may consider to keep its Award to the PRIs for the revised period 2021-2026 at Rs. 10 Lakh Crores.  It has requested that in conformance with the provisions of the XVFC interim report for 2020-21, the devolution of grants to PRIS may be kept as 50 % untied for ensuring basic services and 50 % tied towards Drinking Water Supply and Sanitation, for the initial 4 years of the Award period, namely, 2021-25, after which it may be kept as 25% tied for Drinking Water and Supply and Sanitation and 75% as untied funds for 2025-26 taking into account the progressive saturation levels expected to be achieved in Drinking Water Supply and Sanitation in the Rural Bodies. Out of the untied grants, the PRIs may be allowed to carry out the basic services through various modes of outsourcing, on contract or self-engagement. They may also utilize the grants towards various revenue/recurring expenditure such as operation, maintenance, wage payments, internet & telephone expenses, fuel expenses, rentals, contingency expenditure during calamities etc.  It has also expressed an additional requirement of Grants for Rs. 12,000 crores for the five year period 2021-26 towards enabling the States to construct Gram Panchayat Bhawans, in all the Gram Panchayats lacking such structures, in a time-bound manner, Additionally, the need for multi-purpose Community Halls/Centres in all Gram Panchayats as a critical rural infrastructure has been  felt necessary for the holistic development of rural areas.

PG after complying with the conditions that led to permanent improvement in the functioning of local bodies.

On 1 June 2020, the Department of Expenditure had issued the Operational Guidelines for the implementation of the recommendations on Rural Local Body (RLB) grants contained in Chapter 5(Local Bodies Grants) of the Fifteenth Finance Commission (FC-XV) Report.  The Ministry of Finance on communication dated 17 June 2020, had released the first instalment for Rs. 15177 cr. (25% of Rs. 60750 cr.) to the Rural Local Bodies based on the broad principles stated in the FC 2020-21 Report. It also stated in the notification that the State Governments will distribute the amount to all excluded areas   with population  weightage of 90% and area weightage of 10%.

The MoPR has also sought for the support for the RLBs in view of the Covid Pandemic to enable the PRIs to face the new emerging challenges.  The Ministry further reported that during  the pandemic the Panchayats have implemented a range of preventive and protective measures in an effective manner that has earned the praise of the Prime Minister, Mr Narendra Modi  on the National Panchayati Raj Day.   However, the major challenge that has emerged during the pandemic was the system's inability to provide cooked food at short notice to affected population in event of the exigencies.  For this the MoPR has proposed the concept of ‘community kitchens' and equipping the SHGs in partnership with PRIs to operationalise ‘community kitchens'.  The Ministry has sought the support of the XVFC to strengthen the rural communities.

The MoPR has also informed the Commission that as per its recommendations, the Ministry has launched AuditOnline software application to facilitate the timely completion of the auditing process of the accounts of Panchayats and bring about financial discipline and transparency with regard to the utilization of the Finance Commission's grants.

The Commission has assured the Minister and his team its full support.